Play as a budding alchemist searching for the elixir of life. Collect mysterious reagents and brew them into potions. Throw or drink your concoctions to overcome your obstacles and defeat the meddling creatures in your way.

The goal of a game of Amrita is to travel the lands in search of the Elixir of Life. Each area is frought with danger from a variety of nasty critters, but fear not for you come well equipped with set of powerful potions. Throw or drink the potion to unleash its powerful effect, or leave one behind for a monster to choke down.

Movement is accomplished by using the W A S D or using the arrow keys. Moving into enemies will attack them.

Each level features an exit gate (purple dashes) along the outer wall that will lead you to your next adventure.

If you [t]hrow a potion you will then need to select a direction to throw the potion. Thrown potions travel 2 squares before exploding.

Every area you enter will refill your potions, up to three, so be sure to use them wisely and leave any potions you don't want behind.

Each potion brings with it its own unique mixture of reagents to create potent and powerful effects. You'll need to determine what ingredients safe to drink, and what's better thrown at your enemies. Each reagent may act differently depending on how its used and what else it is mixed with. Careful experimentation will be key to your success.

Like any good alchemist you've brought along a handy set of reagents. By selecting a potion ([1-5]) and then [b]rewing you can toss some extra reagents into a potion to give it an extra kick. Each new area you travel to will give you some additional reagents to work with.

[r]untlings are nasty little critters that will greedily devour anything they come across. More teeth than fur they pack a nasty bite but their small stature makes them easy to dispatch.

[s]wordsnakes have a long sharp blade-like tip to their tail that they can use with devastating effectiveness. It's a minor relief that they have no hands to pick things up.

[g]rubkins are devious beasts covered by a fleshy bulbous exterior. They're aggressiveness is only matched by their recklessness.

[p]utrous are some of the most vile beings known to mankind. If you find yourself face to face with one then you've gone wrong somewhere in life. 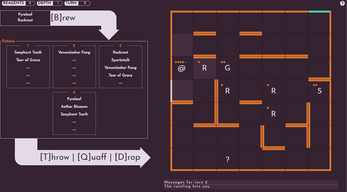